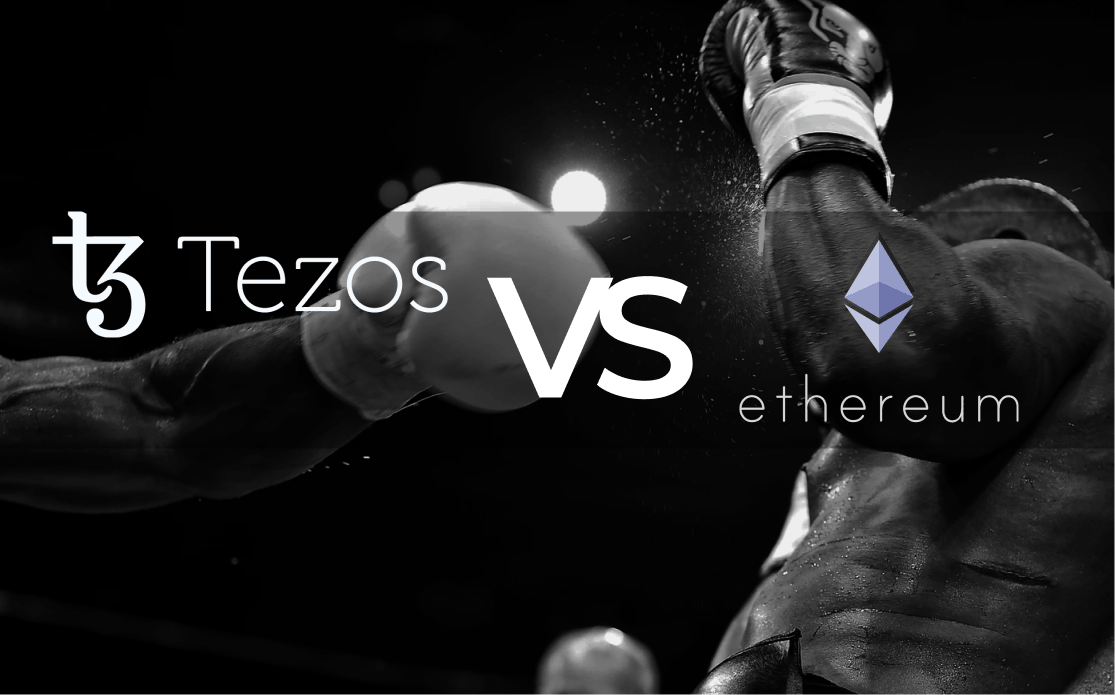 Trust-as-a-Service for the global marketplace

Updated: We’ve updated this post to align with the latest Tezos update (Florence) and market prices.

The year 2020 shook the world in several ways, but cryptocurrencies came out stronger than what many expected.

However, a challenging part of the crypto revolution is to ensure similar progress in the utilitarian aspect of distributed ledger technologies (like blockchain).

In the context of crypto utility, Ethereum leads the way as the first blockchain-based platform designed for creating decentralised applications (dApps).

Ethereum introduced the ability to create smart contracts, build dApps, and above all, it provided access to a decentralised network that makes it possible to utilise computational resources with little upfront investment.

And since we’re focussing on platforms that support smart contracts and the development of dApps, it’s impossible to leave out Tezos.

Tezos shot to popularity with its huge ICO, raising over $232 million in as short as 13 days.

It is among the leading decentralised networks both in terms of utility and market cap.

So, how do Tezos and Ethereum differ from each other? Let’s find out.

Tezos Vs Ethereum: A Brief History

So, how do Tezos and Ethereum differ from each other? Let’s find out.

What is it?: Ethereum is a decentralised platform for application development and value transfer.

There is no definite supply of Ethereum. Its annual cap for new token release is limited to 18 million ether.

With its upgrade, Ethereum 2.0 will adopt the Proof of Stake consensus algorithm.

Ethereum has an off-chain governance structure under which the core team discusses the technical feasibility of Ethereum Improvement Proposals (EIPs).

The other option is through Ethereum Request for Comments (ERCs).

What is it?: Tezos is a decentralised network for dApps development that supports smart contracts.

The concept of Tezos was published in September 2014 by Kathleen and Arthur Breitman.

Tezos had one of the biggest ICOs in history, raising over $232 million. There were some hiccups in the top leadership, but the Tezos Test network came into life in September 2018.

Tezos is self-amending in nature, which means any changes in the blockchain must be approved by token holders through voting.

Tezos Vs Ethereum: An Apple-to-Apple Comparison

Ethereum and Tezos both support the development of dApps, smart contracts, and are undergoing regular upgrades to boost their utility.

However, there are fundamental differences between these platforms that give them an edge over the other.

Proof of Work (Ethash) relies on solving complex mathematical puzzles. Here is how the process works.

However, considering the excessive use of energy and computational resources in PoW, Ethereum is shifting to PoS in Ethereum 2.0.

The platform has already launched the Beacon Chain that will bring PoS to the Ethereum network.

Terminology in Tezos Vs Ethereum

Here is how PoS works:

How is Liquid PoS different?

While the underlying PoS mechanism functions the same way in Tezos, the platform allows delegation of voting rights without transferring ownership.

It means individual nodes can delegate their voting rights to bakers.

Also, bakers have the choice to delegate their voting rights to other bakers and receive compensation for doing so.

Tezos uses an on-chain governance mechanism, and that’s why it is called a self-amending chain.

The process of introducing a change to Tezos is as follows.

Unlike Tezos, Ethereum has an off-chain governance mechanism, which means the proposal or request for any updates goes through a panel of core members.

These members hold extensive discussions about the proposed upgrades.

If the stated upgrade passes these discussions, along with trial runs, it’s implemented on the Ethereum blockchain.

Here is how the governance process works on Ethereum.

Another mechanism to include a change with the Ethereum ecosystem is through Ethereum Request for Comments (ERCs).

If an ERC holds through different technical parameters, it is converted into an EIP and taken through the same procedure.

Smart contracts are self-executing codes that can be automatically executed on a blockchain network once their underlying conditions are met.

Both Tezos and Ethereum support smart contracts; however, there some are differences in terms of the language used for coding smart contracts on each of these platforms.

Tezos, on the contrary, uses Michelson for writing smart contracts.

Michelson is designed specifically for Tezos, with unique features, such as data structures, functions, and stack-based programming.

In short, Tezos offers the security enterprises may seek before conducting business over the blockchain.

Additionally, Michelson produces a bytecode that can be easily understood or made sense of, making it a suitable option for escrow smart contracts.

Ethereum bytecode, on the contrary, resembles assembly output, making it hard for non-programmers to introspect.

Ethereum is upgrading to Ethereum 2.0, which brings in multiple features to the network.

Tezos is constantly improving its underlying protocol by introducing upgrades and features.

Florence: The Florence upgrade has increased the maximum operation size to 32kB. The new gas optimizations and arithmetic have improved the execution cycle performance of the Michelson interpreter by 35%. Florence upgrade changes smart contract execution to depth-first execution order, making it developer-friendly. Also, the upgrade removes the Test Chain feature in the Economic Protocol for a streamlined implementation.

Escrow smart contracts have a huge utility for businesses and individuals alike.

They allow two parties to transact without having to know each other, thereby providing a trustless channel for business transactions.